Step onboard our lovingly restored heritage coaches, hauled by our heritage diesel locomotive DBR1254 for the southbound journey and by steam locomotive Ja1271 on the return journey. Settle into your seats to enjoy this special trip along the North Island Main Trunk to Feilding and return. Jump on board with the Glenbrook Vintage Railway and Steam Incorporated as we join forces and celebrate 100 years of the Waiuku Branchline – where the GVR is based – and Steam Inc celebrates its 50th anniversary!
Glenbrook Vintage Railway have teamed up with our Wellington based friends at Steam Inc to bring to Glenbrook their resplendent Ja1271, for a number of joint trips in Auckland & the Waikato.
So hop on board as we step back in time – to how rail travel used to be – and experience steam on the main line. 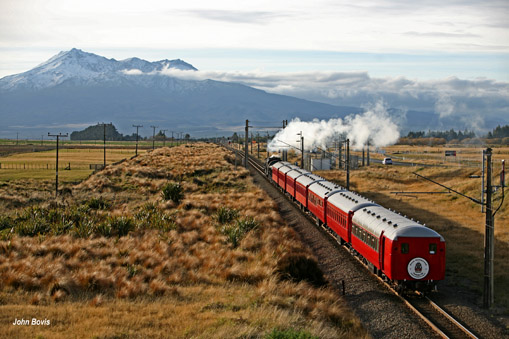 Bring your friends and family along for this relaxing train adventure.

Our friendly staff will be waiting to welcome you on board at Ohakune station where once you are seated, our train will begin its journey south. After passing through the Karioi Forest and past WPI Pump Mill, we will crawl over the Whangaehu River at Tangiwai - the site of the Tangiwai Disaster in 1953. We continue through to Waiouru - where a short railway siding used to service the army camp here (many thousands of young men travelled by train to Waiouru for their compulsory military service). We will follow the Hautapu River on and off before traversing the famous Turangarere horse shoe curve, so named because of the horse shoe shape that the track makes whilst sweeping around the hillside allowing trains to pass through the rugged terrain in this area. We travel through many more curves before leaving the Hautapu River at Mataroa and passing through the Mataroa tunnel - we will see the river again on our final approach to Taihape.

After a quick stop at Taihape to pick up more locals, we once again follow the Hautapu River until it meets the mighty Rangitikei River, south of Utiku. We shortly after cross over the short but charming Toi Toi viaduct. The next three viaducts are of more modern concrete construction due to the line having been deviated to here in the 1980s. First up is the Rangitikei north viaduct at 81 metres high and 160 metres long. Shortly after is the 73 metre high, 160 metre long Kawhatau viaduct where you can catch a glimpse of the joining of the Kawhatau and Rangitikei rivers. Finally crossing the longest of the three viaducts, the Rangitikei south viaduct at 78 metres high and 315 metres long. Marvel at the beauty of the Rangitikei river and its sheer vertical papa cliffs (unique to this part of New Zealand).

We then pass around the township of Mangaweka (try and glimpse the old railway route on the hills to the right) before crossing over the highway and into the tunnel of the same name. As the Rangitikei bends into a series of curves, we follow a straighter path on the western side, crossing over the Makohine viaduct which was built in 1902 and stands 73 metres high and 229 metres long. We then get our gallop on, swiftly passing through Hunterville and Marton before arriving in Feilding. Here you will have time to alight the train and visit the township of Feilding - voted most beautiful town in New Zealand 16 times.

At Feilding, our special guest awaits! Steam locomotive JA1271 and carriages will join our train to lead us on our homeward journey. After we depart, we re-trace our steps but with the amazing sound a steam locomotive pulling the train as it climbs up towards the central plateau. After another quick stop at Taihape to farewell to those passengers alighting here, we continue on to Ohakune where we arrive back into the station at 5.40pm.

Complimentary light refreshments are included in the fare and hot/cold food and drink will be available to purchase throughout the journey.

A rare chance to take an easy trip by rail behind a steam engine along the scenic Rangitikei River!